There is a Cycle to Domestic Violence 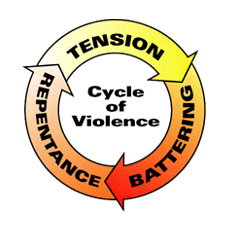 The "Cycle of Violence" consists
of three repeating phases:
Tension, Battering,
and Repentance/Honeymoon.
The cycle then repeats.

This is the tension-building phase. The man becomes edgy, critical, and just plain irritable. He doesn't need a reason to feel this way. She knows what's coming, and she may try to pacify him. That's a waste of time. (In some instances it actually triggers the second phase.) Being around the abuser during this phase is like walking on eggshells. Basically, the woman is in a Catch 22 because he may take it as a challenge, which will set him off; and if she says nothing, he feels that she is withdrawing and not giving him the attention he wants. (Bottom line: he wants to control her.)

As he gets more and more tense, there is the inevitable escalation, starting with small incidents involving yelling, slapping, and calling her names "whore" or "slut". She may try to pacify him, but he's on to her quickly, escalating with his own techniques for rendering her helpless and releasing his rage. If she acts nice and sweet, he feels she's giving him license to let her have it. If she challenges him, she's gone. This can go on for days; it can even go on for years.

Some women actually get so edgy that they finally do or say just the thing that will "make him lose it". This is not to say that the woman's in control, but only that many victims feel that if they get that part over, go through the violence, they'll be back to "normal."

He "loses it" and gets violent. Some women experience emotional brutality, but usually the violence is physical; it can lead to her death. The rage is blind and senseless. The man is transformed into a madman. A woman will describe her husband as physically transformed: his eyes bulge; the pupils are dilated; he is seething with rage. Some men rage until they nearly pass out, while others become calmer and calmer as they pulverize everything and everyone in sight. These are some of our solid and upright citizens ˆ civic leaders and professionals who seem to be examples of success when they're out in society, and "regular guys" who seem to be very gentle and kind.

It's important to realize that most women who kill their batterers do so before he gets to this stage. They know what is coming, and they kill him because they believe he will kill them. But most bettered women don't kill their husbands, and most batterers do not kill their victims.

After the brutality, Mr. Hyde reverts to the smart and charming Dr. Jekyll: the psychopath disappears and is replaced by an often sweet, loving and very contrite man. Unless you see this transformation, it is hard to believe that the two can be the same man. By this time the battered woman is in such a physical and mental state that she is putty in his hands. While he acts sweet, psychologists believe he is actually working his psychological tactics, digging the claws of control more deeply into her soul. He cons her into thinking that only a loving woman could put up with his level of abuse, that she's the key to his emotional well-being. He wants her to feel that he depends on her for forgiveness; at the same time, she thinks that this is how she'll get back the "real" man. She believes that his violent side is not the real person; rather, the "sweet" side is. She doesn't understand that the reverse is true; the sweet side is a con, a lie, a more sophisticated tactic to get deeper into her and suck the life out of her. This is precisely what these sick men live for. It is important that batterers be seen for what they are. These men kill helpless women. They brutalize pregnant women and often cause miscarriages or even kill the mother. They lead some women to suicide or murder.

The magic window of opportunity for leaving is during phase one or between phases two and three. Before he gets her back into bed, she must leave. The part between the "honeymoon," phase three, and the tension-building stage, phase one, is often the only time in their lives they are happy together.

Then, they may go back into the first phase, but it is only a matter of time until tension builds again, from the areas in his life where he‚s not in control, and the cycle repeats itself again and again.

When the explosion comes, she may call 911, but often by the time the police arrive, the man is calm, and back in control. Maybe the house is a mess; the woman is probably hysterical. Who are the police going to believe? If they are uninformed about a domestic abuse problem, they see a sobbing woman, a calm man, and a messy house. If there are children, they may be crying. This is where education is so important. Rather than arresting the husband or boyfriend, the police may arrest her if the husband insists that she was the violent person. They may tell her that if she insists on his arrest, she will have to go to the police station, while the kids will be put into foster care. Such episodes actually happen, though education is changing that.

One thing you can do right now is find out what arrest policy and training program your police department has. If it does not have a domestic violence program, insist that one be started. Write letters to the editor of your local paper and speak with others about the matter. Police are among the most important people in the battle against violence. They must learn about it, and the law must provide for the arrest of a batterer when the woman reaches out for help.