An Overview of Domestic Violence 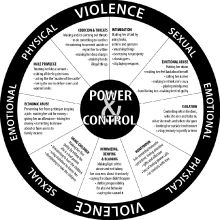 Domestic abuse is a pattern of coercive behavior used to establish power and control over another person through fear and intimidation, often including the threat or use of violence. The most common acts of domestic violence generally fall into one or more or of the following categories:

Physical Battering - The abuser's physical attacks or aggressive behavior can range from bruising to murder. It often begins with what is excused as trivial contacts that escalate into more frequent and serious attacks. Physical abuse can be grabbing, pinching, shoving, slapping, hitting, hair pulling, biting, arm twisting, kicking, punching, hitting with objects, stabbing, and shooting. Batterers have even kept their victims hostage by not allowing them to take necessary medications, have medical care, the use of a wheelchair, food, fluids, sleep and hygienic needs. The abuser can also force the victim to use drugs or alcohol.

Emotional Abuse - The batterer tears down the victim's sense of self-worth by continual criticism, name calling, saying things that are meant to be cruel and hurtful, running down her accomplishments, giving her the silent treatment, making and breaking promises. Telling her she's stupid and not able to function without him. He will question her about who she talks to, accuse her of flirting, or be jealous of time she spends with family, friend or children.

Sexual Abuse - Physical attack by the abuser is often accompanied by, or culminates in, sexual violence wherein the victim is forced to have sexual intercourse with the abuser or take part in unwanted sexual activity. Also includes beating of the sexual parts of the body, prostitution, sodomy, sex with other people, or the use of pornography. Accusations of infidelity. Rape within a marriage is illegal.

Psychological Battering - The abuser's psychological or mental violence attempts to frighten the victim by constant verbal abuse, harassment, excessive possessiveness isolating the woman from friends and family, deprivation of physical and economic resources, and destruction of personal property. Threats to harm her or others, harassing or even killing pets. He also could threaten to kidnap her or the children.

Legal Abuse - The abuser might show control by burdening his victim through a custody battle or a costly court case which will leave her with exorbitant bills to pay.

Economic Abuse - The batterer tries to make the victim totally dependent upon him, controlling money, requires her to keep an account of all money spent, keeping watch over the victim so that she has no outside activities, or harassing her at work.